How UART works and its Interface with Bluetooth

Devices equipped with Bluetooth technology support wireless point-to-point connections, as well as wireless access to LAN, mobile phone network, the Ethernet and home networking. The connectivity between two Bluetooth equipped devices is carried out as serial communication. Bluetooth technology delivers the received data and receives the data to be transmitted to and from a host system through a host controller interface (HCI). The most popular host controller interface today is either a UART or a USB link.

Now, even though we can use USB or UART, the most commonly used HCI is UART because of following reasons:

◦If UART is used software overhead is very less
◦Its highly cost effective.

A Universal Asynchronous Receiver and Transmitter (UART) is used for communication with serial input and serial output devices. Serial transmission reduces the cost and complexity of the wirings at the expense of speed, and for many applications this is a desired trade-off. The UART takes bytes of data and transmits the individual bits in a sequential fashion. At the destination, a second UART re-assembles the bits into complete bytes. Synchronization for the serial data stream is accomplished by adding start and stop bits to the transmit data to form a data character. Data integrity is insured by attaching a parity bit to the data character. The parity bit is checked by the receiver for any transmission bit errors.

To a host system, the UART appears as an 8-bit input and output port that it can read from and write to. Whenever the host has data to be sent, it just sends these data to the UART in byte format (8-bit wide), whenever the UART receives data from another serial device it will buffer these data in its FIFO (again 8-bit wide), then it will indicate the availability of these data to the host through an internal register bit, or through a hardware interrupt signal. 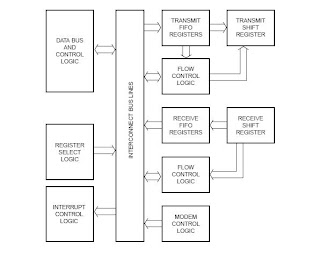 Above is the block diagram of SC16C650B UART. Let me explain the functions of UART using these blocks in brief manner.
Register Select is used to decode the address of register which the host wants to access. DataBus and Control Logic is how the host transmits and receive data to/from UART. There are several registers in UART. Some of them are TransmitHoldRegister(THR), Receive Hold Register(RHR) – both as name suggests is used to hold Transmitting and Receiving data. Then there is Interrupt Enable register used to enable/disable different kinds of Interrupts supported by UART. There are other registers used to control FIFO, Modem, Data format, etc. The Shift Registers are used to break the byte information for sequential transfer OR assemble the bits using FIFO to form Byte data.

Now that we understand the functionality of UART , lets see how it is interfaced with Bluetooth. Consider the following diagram 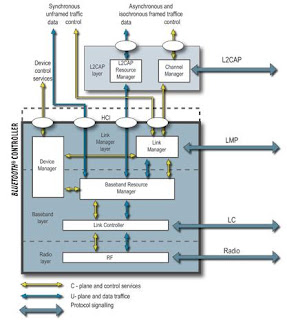 This is typical Bluetooth Controller architecture. The single bluetooth chip will encompass till Link Manager layer. Now this bluetooth Chip when to be interfaced with the system will do it in following manner:

The host controller sends the data using D[7-0] channel and address using A[0-2] channel. The UART chip receives these data and using shift registers and FIFO , it converts into serial data. These serial bits will be then sent to Bluetooth Controller (Rx,Tx,CTS,RTS) and then transmitted via RF channel.

This is a brief overview of working of UART explained using SC16C650B and its interface with Bluetooth.

For more info visit: http://en.wikipedia.org/wiki/Universal_asynchronous_receiver/transmitter.
This post was originally posted by me on http://www.techyspot.com/2010/10/how-uart-works-and-its-interface-with-bluetooth/

Popular posts from this blog

1) Once installed on a device, each Android application lives in_______?
a)device memory
b)external memory
c) security sandbox
d)None of the above
Ans) c

September 04, 2012
1. bmgr tool is used to
a)take backup of the applications
b)to restore operations
c)wipe archived data for a specific application
d)all of the above

2. foreground service
a)starts when you call start foreground()
b)may or may not provide a notification for the status bar
c)notification can't be dismissed unless the service is either stopped or removed from the

intent flag FLAG_ACTIVITY_NO_HISTORY.When finish method is called on A3, What will be the

intent flag FLAG_ACTIVITY_CLEAR_TOP.When finish() method is called on A3, what will be the


Q2. What is the output for the below code ?